A’s, Dodgers, and Padres make MLB Postseason; Is there any Betting Value? 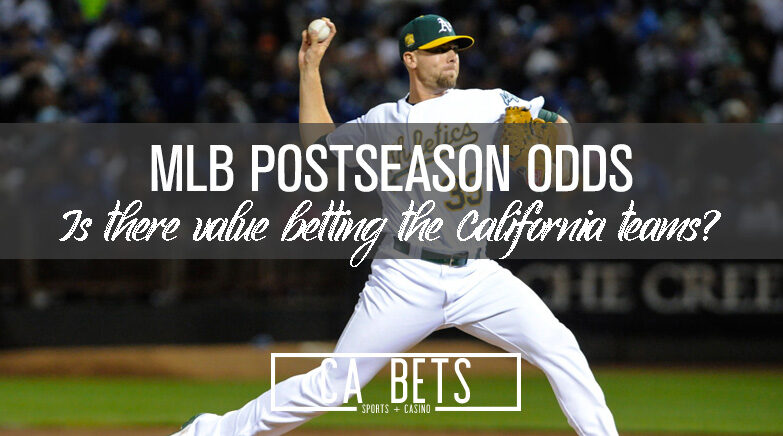 The MLB playoffs are here! For California, they will get a chance to see the Oakland Athletics, Los Angeles Dodgers, and San Diego Padres play in the postseason. This year is slightly different, as the field has been expanded to 16 teams, eight from each league.

All three teams will play a wild card round to have a three-game series at their home ballpark. The Dodgers are the number seed in the National League, and the Padres finished in fourth. Out of the American League, the A’s finished second and won the A.L. West.

Let’s get into some MLB playoff betting odds.

All three California teams have home-field advantage this postseason. Although fans will not be in attendance, it will be nice to be able to wake up in your bed instead of a hotel room. The A’s will face the White Sox, the Dodgers have the Brewers, and the Padres take on the Cardinals.

The A’s arguably have the toughest first-round matchup against the Sox, who was one of the best teams in baseball this season. Los Angeles and San Diego have favorable matchups in the Wild Card round.

The Dodgers have the most well-rounded team among the California teams that made the playoffs, and arguably have the best team in the postseason. San Diego will not have Mike Clevinger or Dinelson Lamet, which could hurt them this postseason as pitching is such a crucial factor in October.

If the Dodgers and Padres both win round one, then they will square off against each other in what will be an exciting NLDS matchup. Betting one of the National League teams will come down to the NLDS, so do your homework and choose wisely on the World Series futures.

For Oakland, if they get past the White Sox, then they have a strong chance of making a run this postseason. The A’s will play the winner of the Twins and Astros, who they have the edge over, and then they are one series away from the World Series.

The A’s won the A.L. West and have the second-best record in the American League. Their prize, the Chicago White Sox in the first round. The matchup is not ideal, but they also offer the best odds in the series. Both teams struggled down the stretch, but being at home will be huge for this Oakland team.

This series is fairly even and could come down to Game 3. If Oakland can take one of the first two games, they should have the starting pitcher edge in the rubber match to move on in the postseason.

The San Diego Padres were impressive in the 60-game sprint this season. At the trade deadline, they went out and made about six roster moves to boost the chances of winning the World Series this year. After having one of the best records in the National League, they are poised to make a World Series run in 2020.

Yes, the Dodgers are the favorite to win it all, but San Diego has value at this number. No Mike Cleinger and Dinelson Lamet will be tough, but the Padres should overcome injuries and find themselves playing deep into October.