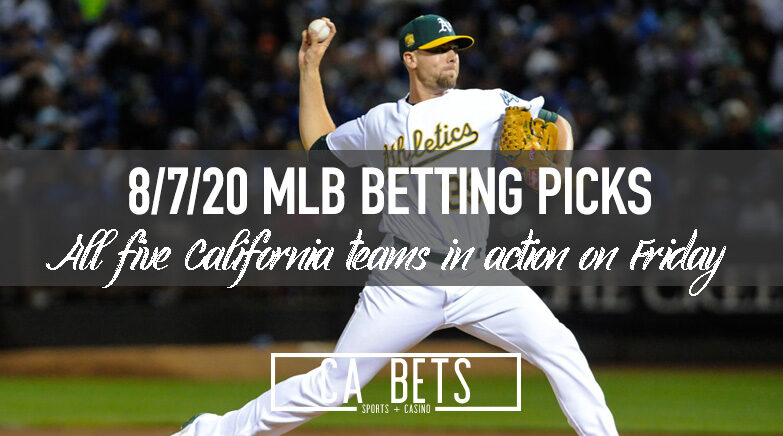 The MLB slate is full this Friday with all five California teams in action. Games across the board have value so let’s dive into today’s action.

The Angels will take on the Rangers at Globe Life Park. Griffin Canning is on the mound for the Halos, and Jordan Lyles starts for the Rangers. The Angels have the edge in starting pitching. Despite Canning having an xFIP at 4.10, his SIERA rating is 3.79, and the Rangers have struggled to hit lefties all season. Texas’ offense against right-handed pitching has them at a .274 wOBA and 67 wRC+. Canning’s K/9 is over 10 this season, with a 7.7 HR/FB percentage.

As for the Lyles, he has been off to a slow start this season with a 7.14 xFIP. His fastball velocity is relatively the same, which could say he has been unlucky for a guy who has a career 4.35 xFIP. His expected wOBA and ERA are closer to his career averages. The Angels offense has been top-10 against righties this season, and they post a .335 wOBA and a 122 wRC+ against a right-handed pitcher.

Until Lyles can figure it out, I’ll take the Angels to be up by at least one through the first five innings. The Angels offense has played well as of late, and Griffin Canning is going to be one of the top arms for the Angels over the next few years.

Oakland and Houston are jockeying for early first place positioning out of the A.L. West. Houston will start Zack Greinke tonight in Oakland as the Athletics will put Chris Bassitt on the mound. Greinke has struggled to start the year off as his xFIP sits at 4.37. However, the biggest concern is that his fastball is three MPH slower this season. The A’s bats are starting to heat up after a slow start. Oakland has been an average hitting team against righties, but the offense is starting to come alive.

Chris Bassitt is off to a great start in 2020 with an xFIP of 2.66 and an 11.17 K/9. Bassitt should be able to limit the Astros bats despite Houston having a 122 wCR+ against righties. Alex Bregman and Jose Altuve have had slow starts to the season with both players hitting below a .215 batting average.

Oakland has the overall edge in this one. The A’s have the better pitcher going tonight, and although the Astros are a slightly better hitting offense, Bassitt should be able to limit the Houston bats. The biggest edge is the bullpens as Houston cannot find a reliable reliever while the A’s have on the of the best bullpens in baseball.

Arizona heads to San Diego for a big weekend series. Luke Weaver takes the mound for the Diamondbacks, and Zach Davies will start for the Padres. Through two starts, Luke Weaver’s ERA is 14.73; however, he has a 5.44 xFIP. This shows how unlucky he has been to start the season despite seeing added velocity to his fastball. The Padres have been one of the best right-handed hitting teams in baseball, so if Weaver does not turn it around, then the game can get ugly early.

Davies is pitching on par with his career averages. His xFIP sits at a 4.46 and K/9 at 6.30 this season. However, he has lost some velocity on his fastball, which is a concern. The Diamondbacks bats have been silent to this point in the season. However, after taking two out of three to the Astros and a 14-run night on Wednesday, that might have been the boost they needed to get the offense going.

Zach Davies has been a historical fun fade candidate. The Padres are the better team, but the Diamondbacks have also been playing below average and should regress towards more wins. The San Diego offense is scary, but it looks like the Snakes offense is finally coming alive and should be able to have the edge in the first half of the game.

Three and a half games separate the Dodgers and Giants in the N.L. West standings. The Giants start veteran Jeff Samardzija, and the Dodgers have Julio Urias going tonight. Samardzija has been awful to start the season with an xFIP above seven and his fastball velocity being two ticks lower than in 2019. The Dodgers bats have against righties is very good, and should be able to get to Samardzija early on.

Julio Urias has been pitching on the lucky side to start in 2020. Despite having an ERA at 2.45, he posts a 4.31 xFIP. His fastball is down as well to start 2020, which may be the reason for the ERA-xFIP discrepancy. The Giants offense has been above average against lefties. Although, tonight could be tough as it is their first game back from Coors Field.

Insert fade teams traveling away from Coors Field. The Giants just finished off a road trip and Colorado, and teams tend to struggle their first game back closer to sea level. Over the last five years, in the first game after playing at Coors Field, fading teams that fit the metric is 71-58 (+14.41 units). Also, the under is 65-51-13 (+14.49 units). I think I’ll stay away from Dodgers moneyline and runline as they are fairly expensive tonight, but under nine runs looks like a nice play to make.