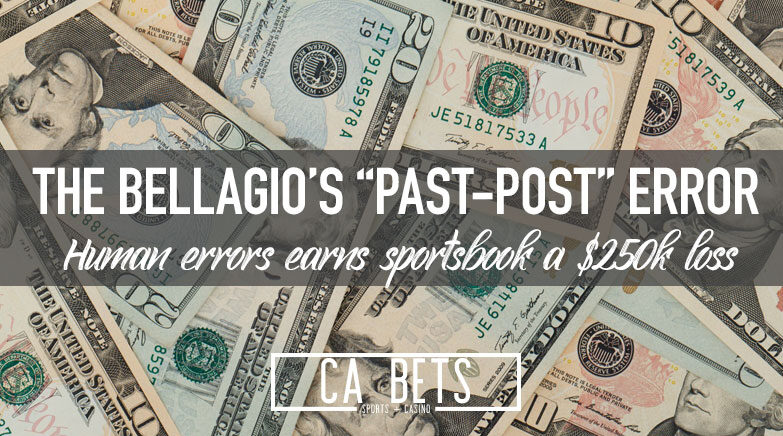 Over the weekend, the Bellagio suffered one of the worst sports betting losses in Las Vegas history. The sportsbook allowed bets to be placed on a game after the game already started. Bettors were wagering roughly a quarter-million dollars on baseball games after first pitch.

The winnings were spread among approximately 50 so-called “past-post” bets that were made on in-progress Chinese and Korean baseball games. A human-error allowed the games to bet on at self-serve kiosks between 1:30 am, and 3:00 am. The games originally started at 1:00 am, and 2:00 am. Also, one winner cashed in a 10-leg $250 parlay, which resulted in a $137k in winnings.

How This Happened and What’s Next for the Bellagio?

An employee at the Bellagio posted a “past-post” line on their board, and bettors took advantage. Players were going to the self-serve kiosks to take advantage of the situation. Past-post errors are somewhat common in sports betting. They occur when sportsbook employees enter in wrong start times for games or simply input a typo. Also, the games were in China and Korean, so its more common for someone to mess up times when they’re being played on the other side of the world.

Bookmakers have a common practice when they accidentally offer past-post wagers. Bettors have the option of either taking the winnings along with a permanent ban from the casino or forfeiting the earnings for the freedom to return. However, the sportsbook has to turn over their dispute to the Gaming Control Board when over $500 is involved.

Overall, the Bellagio will recover. This issue will be resolved by the GCB and will decide the right way to grade the “part-post” bets. However, the timing is unfortunate as casinos and sports have been shut down due to COVID-19. The Bellagio will not be happy if they have to shell out the winnings, but American sports are making a return this month. Maybe that’ll help recoup the losses they are facing.

Is this the Worst Loss Sportsbooks have Suffered?

The short answer is no. The Bellagio suffered a tough loss over the weekend due to human error. However, sportsbooks have suffered bigger losses in the history of sports betting.

In 2018, sportsbooks lost a combined $7-10 million one weekend in the NFL. That week, the teams that were receiving a majority of bets went 11-0 against the spread, making it one of the worst losses for Vegas.

Overall, when these unexpected losses happen, it usually doesn’t hurt the casinos in the long run. Especially in November, when the NFL, NBA, NHL, and college sports can bet on, sportsbooks usually recoup the losses quite quickly. Bettors have bad days, and so do sportsbooks.

Losses are part of the roller coaster that is sports betting. Almost every sportsbook has seen the “past-post” error happen to them, and it is always embarrassing when it happens. For the Bellagio, they’ll let the GCB determine the outcome of the bets, and move forward.

The losses hurt, but the NBA and MLB are set to return July 23, with the NHL returning in August. The quarter-million loss hurts not, but they’ll be fine in the long term.