Blazers Knock off the Lakers in Game 1; How Does this Effect the Series? 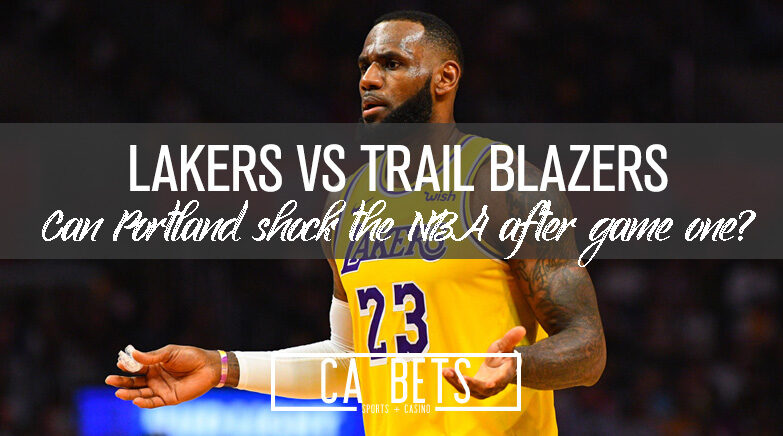 On Tuesday, the Portland Trailblazers knocked off the Los Angeles Lakers 100-93 in game one of the first round of the NBA playoffs. The Trail Blazers were +6.5 against the spread, and +230 on the moneyline.

Portland was on fire the remaining eight games of the NBA season down in Orlando. They fought their way to the eighth seed in the playoffs to face the Lakers. Although Portland had a tall task in front of them, they showed that they would not go away lightly just because they are the eighth seed this season.

Winning the first game in a series, especially as the underdog, is huge. There is no guarantee that the Trail Blazers will be able to keep up this the whole series, especially going up against Lebron James and Anthony Davis. However, they did show they can win and should be taken seriously.

How Portland can pull of the upset

The Trail Blazers were able to pull of the game one upset thanks to a solid defense. They held the Lakers to 35 percent shooting from the field and 15 percent from beyond the arc on 5-32 shooting.

For game one, Portland had a defensive rating of 91.2, the best among playoff teams. The strong defensive performance did not reflect the 114.3 defensive rating the Blazers had in the regular season, which was good for 27th in the league.

Overall, it was most likely a combination of good defense from Portland and poor shooting from Los Angeles. The Lakers still managed to outrebound, have more assists, and turn the ball over less, and commit fewer fouls than the Trail Blazers did.

Portland will need to clean up in those categories to make sure they can come out of game two with a win. The Blazers will still need to rely on Dame Lillard to carry this team on the offensive end.

Lillard is arguably the MVP in the NBA bubble and is the reason why Portland is in the playoffs. In their game one win, four starters reached double digits as Lillard lead the way with 34 points. Getting role players like Carmelo Anthony going will be key to this series. Anthony had 11 points, 15 rebounds, and five assists in their 100-93 win.

Changing of the odds

Since the Lakers’ Game 1 loss, the Clippers have the same odds as the Bucks to win the NBA finals. Both teams are +280 to win the NBA championship, according to BetMGM. The Lakers now sit at +350 to win the NBA, which is still nad if you like them at that price.

The Lakers now have the lowest odds of every favorite after one game. They are -182, and no other favorite is less than -358 to win their series at BetMGM. The chances of the Trailblazer pulling off the incredible upset is low, but the odds say they have the best chance.