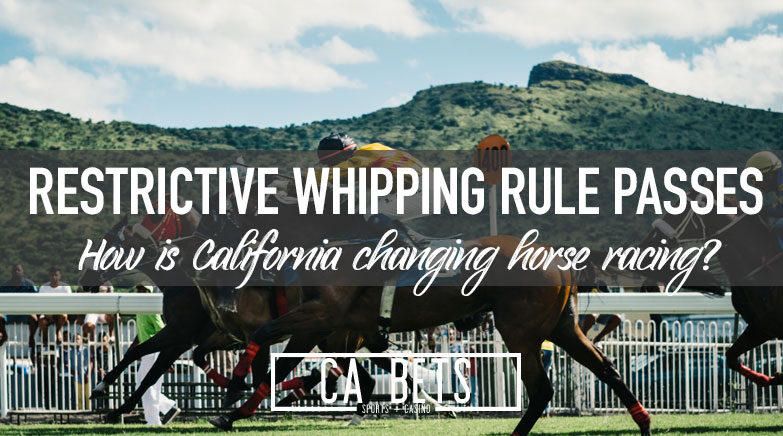 Last month, California legalized a new whipping rule that would restrict jockey’s from whipping a horse more than six times during a race. Also, if a jockey whips a horse six times, then they will have to use an underhand whipping motion for the rest of the race. A jockey will not be allowed to whip a horse more than twice in a row.

There was a 4-2 approval in favor of the new rule with one of the no votes came from Hall of Fame Jockey Alix Solis. Mike Smith and Aaron Gryder, and representatives from the Jockeys’ Guild urged the board to wait at least a month before voting.

The delay would allow for a proposed national whipping law to take place.

However, attorney Shane Gusman, who represented the Jockeys’ Guild, believes the whipping rules will damage horse racing in California based on false public perception. “You’re going to end racing in California. It’s just going to happen if you go down this road of trying to regulate perception rather than reality.”

Racing board Rule 1688 will also prohibit the use of whips during morning training and after the finish of races. Violators of the new rules will be fined $1000 and a minimum suspension of three days. Jockeys would be allowed to show or wave the whip without touching the horse or tap the horse on the shoulder with the whip in the down position, under the new rule.

The rules still need to be reviewed and may not take effect until October.

How Will Bettors Adjust?

How often a horse is whipped could be another aspect that is handicapped not only in California but across the country. Other states might legalize whipping rules, which is a possibility if federal law steps in. Right now, all of that is still too early to tell.

Also, there is still going to be some time before the new rule is implemented. The guess is that it will be implemented by October, but it could take longer due to the COVID-19 outbreak. Overall, the new rule will change California’s horse racing forever.

There’s a good chance that it won’t be the downfall of it as attorney Gusman stated, but there will be changes to the horse racing dynamic. If horses are safer while California racing does not alter that much, then it will be a win-win for both parties.