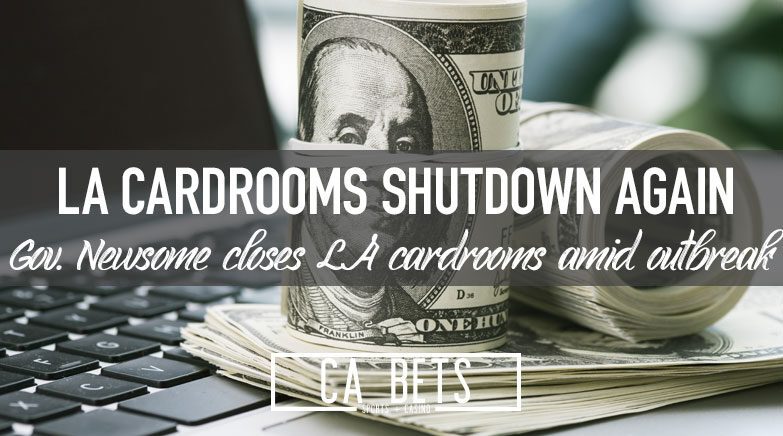 Over the weekend, California Governor Gavin Newsom told Los Angeles cardrooms to close their doors just two weeks after reopening. The Governor motioned that the coronavirus is spreading at an alarming rate. Cardrooms, along with dine-in restaurants, movie theaters, wineries, zoos, and museums, have shut down in LA county and 18 others.

Commerce Casino, Bicycle Hotel & Casino, Hollywood Park Casino, Hawaiian Gardens Casino, and Hustler Casino all shut down due to COVID-19. Some casinos like Bicycle Casinos and Commerce Casino are allowing customers to conduct cage transactions this week before they officially shut down until further notice.

There is no surprise by the LA County shutdown. Nearly 50 percent of the 327,000 statewide cases have been in LA County.

What’s Next For Cardrooms

Cardrooms around LA County began to reopen at 25 percent capacity and were allowed to go to 50 percent once they hit Phase III. However, this is all for not as now cardrooms have to close their doors again.

This comes after poker rooms had to close in mid-march from the initial COVID-19 outbreak. Now, a recent surge in cases has California scrambling to close down again to limit the spread. The blow hurts poker rooms as some of the locations have over 100 employees on staff. After finally getting back on their feet, the shutdown kicks them back down and has to wait for the oncoming second wave until it is safe again.

There are not many things cardrooms can do at this point. They will have to listen to Gov. Newsom’s orders until it is safe again. At first, Newsome allowed patrons to be at the casinos as long as mandatory mask-wearing was in place. Now, that is not even possible.

Despite cardrooms having the closedown, tribal casinos remain open around the state. One positive note for the tribes is that they have no casinos in LA County, which just put the clamps on cardrooms.

However, many native casinos can be found around San Diego county, which is not a far drive from LA. Right now, there is no telling if the state’s gaming community will have to shut down altogether. LA County is a lot more populated than other areas of California, which helps out tribal casinos remain open, for now.

There’s a very good chance that a statewide shutdown happens again, cases continue to spike across California and the U.S. just a month or so after other casinos were able to reopen. Cardrooms only had a two-week window before the Governor forced them to shut down again.