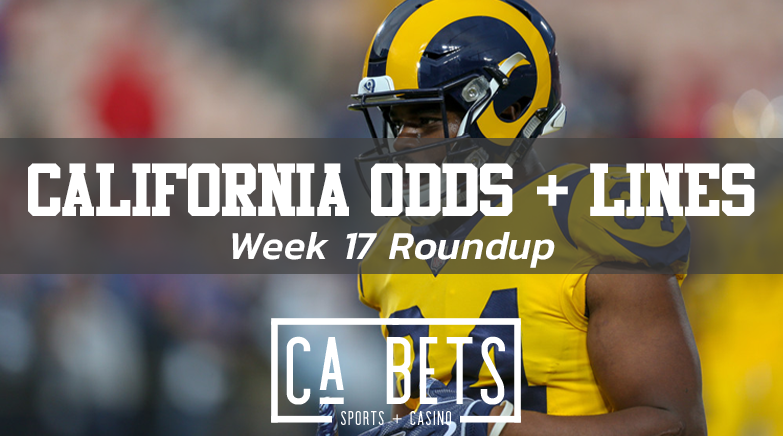 Week 17 is when betting on sports starts to get a little weird. There is a lot of uncertainty when it comes to who will be playing in many of these matchups. You get odd spreads like the Chargers favored against the 14-1 Chiefs because the Chiefs have locked up the #1 seed and will most likely not be playing any of their starters. However, this does not mean that there is not tons of value to be had with sports betting.

Last week was another disappointing week for California football as, in my opinion, everything that could go wrong went wrong. First, the Rams lost to the Seahawks and are now fighting to stay in the playoffs against the Arizona Cardinals on Sunday, and they might be without Jared Goff, who dislocated his thumb in the loss to Seattle. Then, the 49ers won their game, only shooting themselves in the foot when it comes to draft capital as the team desperately needs to draft a quarterback. Lastly, the Chargers won, giving many the sense that Anthony Lynn might have saved his job these past few weeks, which would be the worst possible news for this franchise as a new head coach is desperately needed.

This game is going to get weird as I doubt any Kansas City starters take the field in this game. With how well the Chargers have been playing, I think that -2.5 is a great choice here. However, finding a bookmaker to offer the spread until things are certain on the Chiefs’ end will be difficult. Regardless, I am projecting a Chargers blowout, as Anthony Lynn has made it obvious that he does not care about draft position.

Justin Herbert should shred the second team for the Chiefs, and he will have another monster game to add to his record-breaking rookie campaign.

Interestingly enough, one of the easiest games to predict when it comes to whether the teams are trying since both are in “win and in” scenarios is off the board for most books. This is because bookmakers have no idea if Goff will be playing. However, if he is, I believe that the Rams have value here. The defense is just too good for the Cardinals, and I trust McVay to figure out the offense.

The Seahawks only have seeding to play for, but I imagine that the team will be playing with the starters for most of this game. I would not be looking for value here as it will be just too hard to gauge what interest these two teams have in winning. Therefore, it is almost impossible to predict the outcome. If forced to choose, then I think that Seattle comes out strong and beats up on the 49ers, but the team could also sit Russell Wilson for most of the game.