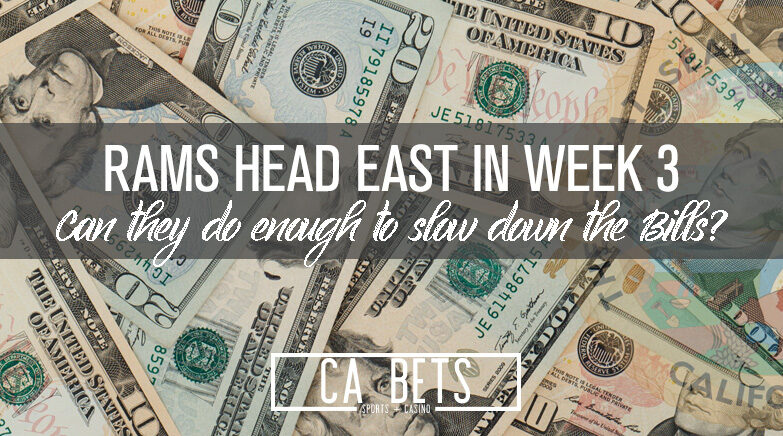 The Los Angeles Rams head to Buffalo to take on the Bills in Week 3. Both teams are off to 2-0 starts to the early season. Josh Allen and the Bills have impressed in the first two weeks, and the Rams have knocked off some talented teams in the NFC East.

The Rams are in a tough spot traveling back to back weeks. Last week, LA was in Philadelphia for their game against the Eagles. Now, they have to go back east to face a challenging Bills squad.

For Buffalo, this will be their toughest test yet after facing the Dolphins and Jets in their first two games. The game is set to kick off at 10 AM ET on the west coast. This will also be tough for the Rams as they just played a 10 am game last week.

Or maybe, this will give them an edge as they are used to the travel schedule in back to back weeks.

Los Angeles and Buffalo both come into this game moving the football very well, ranking in the top 10 in years per play. Although the Bills are moving the ball at a higher clip per play, the Rams offense has been slightly more efficient, according to Football Outsiders.

The Rams have been running and throwing the football very well. The Bills can move the ball through the air thanks to Josh Allen, but they have struggled to run the football in the first few weeks. That could be a problem having to go up against Aaron Donald and the Rams front seven.

As good as the Rams have looked on offense, this will be the best front seven they have faced so far this year. The Cowboys and Eagles defenses have been getting gashed, but the Bills are holding teams to 5.3 yards per play. The Bills rank 12th in defensive efficiency this year.

The Rams defense has been fine, but are middle of the road in terms of yards per play. When you get into the details of their defense, however, the Rams pass defense has been much better than their run defense.

In terms of efficiency, the Rams rank 8th in pass defense, and 27th in rush defense. This could play right into the Bills matchup where Buffalo is moving the ball through the air really well, which the Rams can stop, and struggling to move the ball on the ground, which the Rams have struggled with.

The trenches could be the biggest factor in this game. This is the best offensive line the Rams have faced this season, so getting pressure will be key. The Bills front seven on defense is also strong and could cause havoc if the Rams cannot contain them.

The Rams first two weeks have been nice, but this is the best team they have faced this season. The offensive and defensive lines will need to step up if they want to hang with Buffalo. However, I think the Bills are just too much this week. On top of that, the Rams are traveling east back to back weeks to play in the early game. Not a great situation for Los Angeles