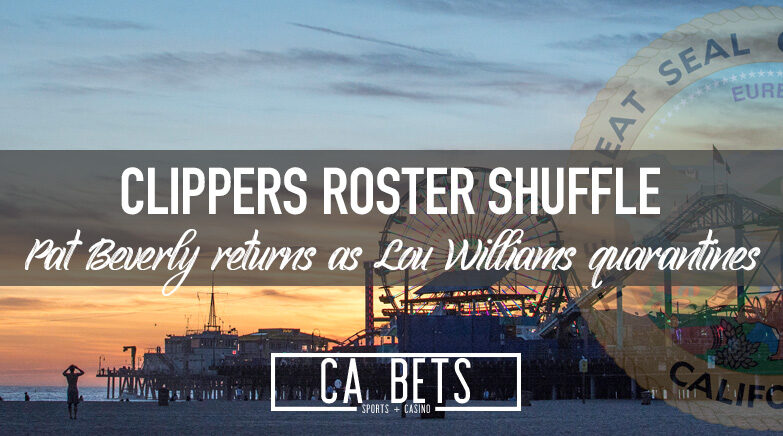 The Clippers are shuffling the roster around this week as the team is set to begin the restart of their season. On Sunday, Adrian Wojnarowski reported that Clippers guard Pat Beverly would be returning to the Clippers. Beverly left the NBA bubble in Orlando last Tuesday due to a family emergency. The return of Beverly is a huge boost to the Clippers roster as multiple players have yet to join the team in Orlando.

Los Angeles does find themselves bringing back Beverly, but will miss Lou Williams for two games to start the season. The NBA has placed Williams in 10-day quarantine after the league investigated the LA Clippers guard for what he did while on an excused absence from the Orlando, Florida, campus. Rapper Jack Harlow photographed Williams at an Atlanta Strip Club.

At points last week, the Clippers were without Lou Williams, Landry Shamet, Ivica Zubac, Marcus Morris, Patrick Beverley, and Montrezl Harrell. That was six rotation players outside the NBA restart bubble in Orlando.

Beverly returned Sunday night, and he is not the only Clipper back. Morris has gone through practices and played 25 minutes in the Clippers’ Saturday scrimmage game. Shamet tested positive for coronavirus and is now back with the team – along with Zuback and now Beverley, and are in shorter quarantines in their Walt Disney World Resort hotel rooms.

Williams has returned to the NBA bubble but has to quarantine in his hotel room for 10 days. He was seen at an Atlanta Strip Club last week. Williams was cited for leaving the NBA bubble to attend a memorial service for a family member.

Harrell is the remaining Clipper outside the NBA bubble. With Zubac returning, this will help Los Angeles in the paint as Joakim Noah, who was signed for the restart, have a more limited role. If Harrell can return before the playoffs, then the Clippers will be at full force at the right time.

How Does this Affect Clippers Odds?

A week ago, there were concerns about the Clippers’ depth during the NBA restart as multiple players were missing from their rotation. Now, the team waits on Harrell to return, which should come before the playoffs begin.

As of writing this, the Clippers are +320 at FanDuel sportsbook to win the NBA title. If they have a full squad, then they have a great chance to run the table in the West. The Clippers and Lakers will most likely face off in the Western Conference Finals.

The Clippers have the edge in the series over their crosstown rival Lakers. The Lakers are missing some of their depth due to injuries and players sitting out for the Orlando restart. If these two teams face each other, then there is a good chance the Clippers can take them in the series.

The Buck and Clippers is the best chance at an NBA finals matchup this season. FanDuel has the exact matchup priced at +370. If Harrell comes back, then the Clippers should have the most talented roster in the NBA bubble.