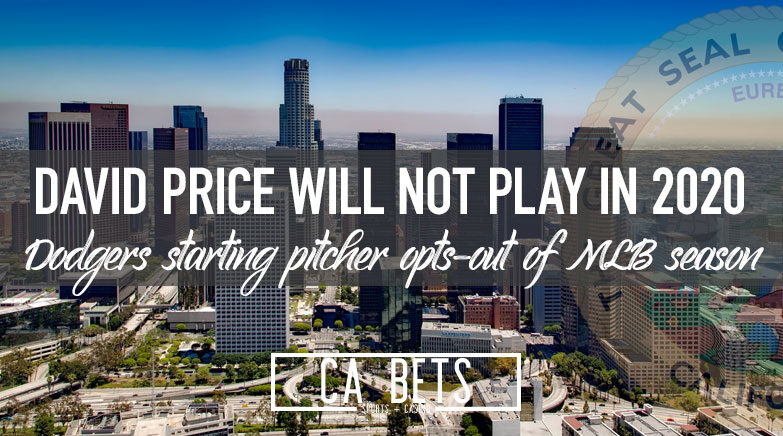 Los Angeles Dodgers starting pitcher David Price has decided to opt-out of the 2020 MLB season. Price announced on July 4 that he would not be joining the Dodgers this season.

“After considerable thought and discussion with my family and the Dodgers, I have decided it is in the best interest of my health and my family’s health for me to not play this season,” Price said via Twiter.

Price signed with the Dodgers this offseason after opting out of Boston. He posted a 7-5 record with a 4.28 ERA in 22 games with the Red Sox.

Are the Dodgers Odds Affected?

Despite losing Price, the Dodgers are the favorite to win the World Series at +380 odds, according to FanDuel. Their win total sits at 37.5 wins with -116 juice on the over. Overall, losing Price might not hurt the Dodgers’ chances as much as bettors think.

Price posted a 2.3 WAR last year and a 2.4 WAR in 2018 for Boston. His seasonal numbers have been in decline as the 34-year-old is towards the end of his career. Despite falling in the regular season, Price found a resurgence in his post-season career.

At the beginning of his career, Price was a disappointment in the playoffs. The five-time all-star could never figure out the post-season spotlight until 2018. During that playoff run, Price went 3-1 with a 3.46 ERA. Two of his three wins came in the World Series against his current team.

Price also posted a 1.98 ERA during the 2018 World Series in 13 2/3 innings worth of work. Despite losing Price for the regular season, if the Dodgers make the playoffs, then they will be hurt even more as Price has figure out post-season play. Even at 34, Price can be a veteran presence to an already talented pitching rotation. The loss of Price might not show in MLB fans watch the game.

Who Could Replace Price?

Dodgers manager Dave Roberts has yet to name a replacement for Price. The fifth starter will be in a strong rotation, which includes Clayton Kershaw, Alex Wood, Julio Urias, and Walker Buehler. The loss of Price will hurt their starting five, but the Dodgers have enough depth to possibly overcome the opt-out.

Tony Gonsolin has been a name thrown around to replace Price. In 2019, Gonsolin posted a 2.93 ERA and a 3.86 FIP in 11 appearances and six starts. However, Gonsolin does not have the stamina built up for the usage they will need him during this stretch, according to Roberts.

Ross Stripling is another guy to consider for the Dodgers fifth starting spot. Stripling has been the Dodgers swingman for the last four years as he has posted 52 starts in his career. He has a 3.51 ERA and a 3.60 FIP for his career.

The Dodgers could use a platoon for the fifth spot, especially during a 60-game ramp up that might need to give guys extra rest during the season. Overall, Los Angeles is arguably the most talented team in baseball. They will be fine without Price in their starting rotation, but the loss of leadership from him could hurt.

There is no telling what impact Price could have had on this team if he played in 2020, but there could be a time in the playoffs where the Dodgers would be begging him to be on the roster. Only time will tell.