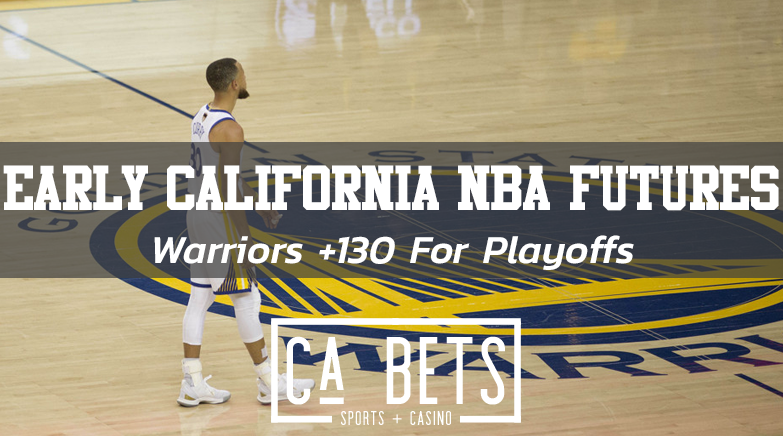 The NBA season is off and running, and it will be interesting to see how the California teams shake out. Prior to Klay Thompson’s injury, it was thought that California had three legitimate title contenders and maybe the three favorites in the entirety of the league. However, the Warriors are now a bubble playoff team in the West. Currently, the Warriors sit in 6th place and look to be improving with each game that they go out there.

The Kings, who are off to a decent start at 4-4, are another team that most likely will be on the playoff bubble come the end of the season. It would be astonishing if half of the Western Conference teams come out of California, but it is not that crazy. Houston, Portland, Dallas, and San Antonio do not look that great out of the gate, but that is a ton of talent that the Kings will have to beat out to make it into the postseason.

The Golden State Warriors currently sit at +130 to make the Western Conference Playoffs. On paper, these odds seem like a great value; the team is sitting in 6th place early on and has looked better each game, with the young core learning their roles in the team. However, one has to remember that this is the West, the Warriors could possibly be the first seed in the East, but on this side of the country, .600 win teams can easily not make the playoffs.

A lot needs to go right for the Warriors, and the first part is that everyone needs to stay healthy. I do not believe that the Warriors can really withstand a long month or two-month injury to any of the top 6 or 7 guys in the rotation and still make the playoffs. While the team may be slightly deeper than in years past, it is going to take all hands on deck without Thompson to finish in a playoff spot.

I believe that +130 is a good bet, just not as juicy as it looks at first glance. I, for one, would not mind taking those odds, but it is not a slam dunk pick for bettors at the moment.

The Kings’ odds are not great, and I think that they are currently inflated by the poor start of other teams to start the season. I do think that this team is undervalued by the media and has an outside shot of making the 8th seed, but I want much longer odds than +250 if I am placing my money on this wager.

The key to this bet, for me, is Zach LaVine, he has looked fantastic when he has played. If he is healthy and can play at a star level, then this team just might have enough to push out a struggling, more talented roster.

+250 is not the worst, but I would be shopping around trying to find longer odds if I were to make a bet on the Kings to make the playoffs.