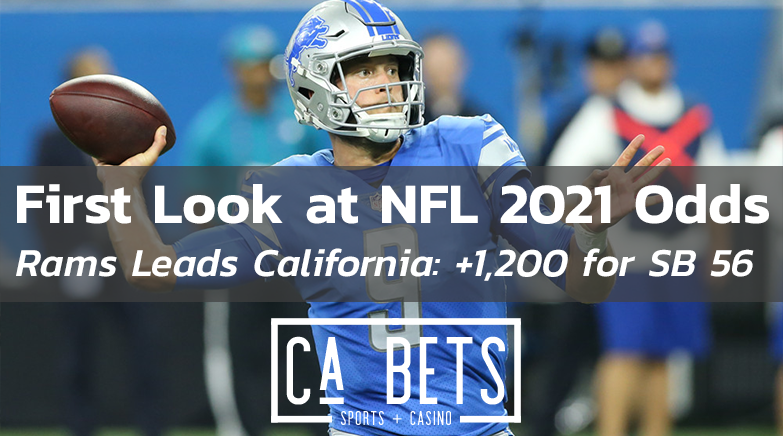 While the Rams fell short in the playoffs and both the Chargers and 49ers were unable to get a spot, even with an expanded wild card place up for grabs, 2021 is looking very bright for these NFL franchises.

The Rams and 49ers, when healthy, are already serious SB contenders. However, both have made and are looking to make more moves to top the NFC and the entire NFL in 2021. Then, with the badman, Anthony Lynn, gone in Los Angeles, the Chargers can look to the future and build upon their Rookie of the Year quarterback, Justin Herbert.

The Rams are in a three-way tie for the 4th highest odds for Super Bowl 56, as they sit at +1,200 with both the Baltimore Ravens and Buffalo Bills. The Rams have jumped up many people’s board as they added Matthew Stafford to the team. This deal included two future first and current quarterback Jared Goff. However, while this is a play that is sacrificing the future, it only helps the Rams’ odds in 2021.

Many have Stafford a tier above Goff as a quarterback. Stafford is tough, a playmaker, and can simply make throws that Goff has been failing to make the previous two seasons. With how dominant the defense was in 2020, it is scary to think about a Stafford-led Sean McVay offense on the other side of the ball.

The 49ers come in 7th in Super Bowl odds right behind the Rams. The 49ers were plagued with injures in 2020, and therefore, had a failure of a season. 2021 is looking brighter; however, the 49ers will have to fill holes left all over the coaching staff, including Robert Saleh at defensive coordinator.

One thing that might improve this team is the quarterback play. Many predict that the 49ers will be in play for a QB, whether that be in the draft or trading for one. San Francisco is already linked with both Watson and Cousins in the trade market. If either of these two lands in SF, especially Watson, then the 49ers might become the NFC favorite and skyrocket up the board next to the Chiefs for Super Bowl favorites.

The Chargers have a new head coach to lead this star-studded roster that also has a top 15 draft pick. This team is in the perfect position to be a dark horse candidate in 2021, and I think that the oddsmakers are expecting this. The Chargers are tied for the 12th best odds with two teams that made the playoffs in 2020, the Titans and Colts. This means that despite not even going .500, oddsmakers have the Chargers as a solid playoff team.

There are tons of reasons to like the Chargers in 2021. The only difficult thing is the fact that they have to face the Chiefs twice a year. On top of this, the Raiders played very well at times in 2020, and the Broncos are simply a QB away from also being an extraordinarily good team. This could be one of the strongest divisions in football, depending on how the offseason goes. However, I faith that the Chargers are going to be a top team for 2021.