George Kittle Signs Five-Year Contract Extension; What Does He Mean to the 49ers 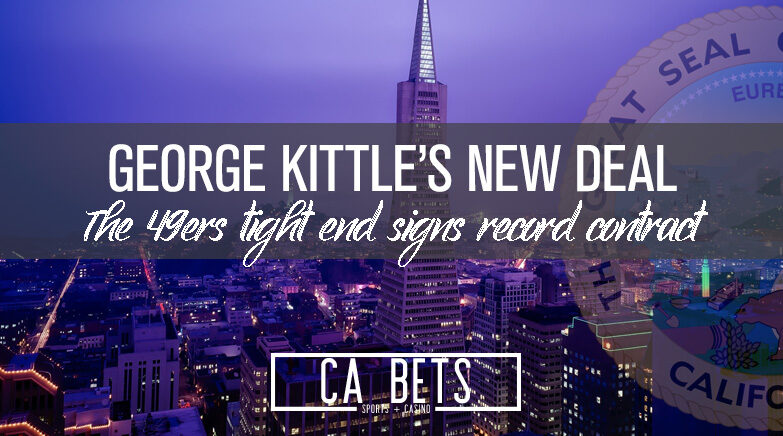 Kittle was originally going to receive a base salary of $2.1 million this season as he earned $645k in 2019. Just a little light for the best tight end in the NFL. However, he was the 49ers fifth-round pick in 2017, where the incentives are not as great for players. Fortunately, the Niners locked up Kittle for the next five years.

The Kittle deal surpassed Austin Hooper’s four-year $42 million deal he signed with the Cleveland Browns in March. Hooper had the largest deal in NFL history for a tight end before Kittle.

Although Kittle was not a sure-fire talent coming into the NFL as a fifth-round pick, he made his mark quickly in his rookie season. He had 43 catches for 515 yards and two touchdowns and improved as the season went on.

Things did not stop there. His 2018 campaign was even better when he had 88 catches, 1,377 and five touchdowns, and set the single-season receiving yard record as a tight end.

He became Niners quarterback Jimmy Garoppolo’s go-to option in 2019. Kittle had 85 catches, 1,053 yards, and five touchdowns, while also help the 49ers make into the Super Bowl for the first time since 2013.

Kittle is a two-time Pro Bowler, a second-team All-Pro in 2018, and a first-team All-Pro in 2019. At 26 years old, Kittle is going to be a staple of the 49ers and become one of the NFL’s best tight ends. He already has a record-setting season and will continue to produce numbers en masse before his time is done.

Kittle is only 26 years old, was a key piece in turning around one of the league’s proudest franchises, and is already a record-setting tight end. It was just a matter of time before he received a massive pay raise.

What Kittle means to San Fran

As of writing this, the San Francisco 49ers are +900 to win this year’s Super Bowl, according to DraftKings. George Kittle is a big part of the reason why the Niners have the best odds out of the NFC to the big game.

Kittle will be Jimmy Garoppolo’s number one target over the next five years. He already led the 49ers in receiving the last two seasons, and will most likely do it again in 2020.

San Francisco is the favorite to win the NFC West at -106, according to DraftKings, and a lot of it has to do with Kittle. The Niners defense is great, but without Kittle, the offense would have a much different look to it.

Kittle helps in both the passing game and the rushing game. He is the best blocking tight end in the NFL, and also manages to be a reliable pass-catcher as well. There is enough evidence as to why Kittle was able to earn a record-breaking deal.

MLB Moves Playoffs to Southern Cal; How Does this Affect the Odds?

$10 turns into Six Figures for one Sports Bettor