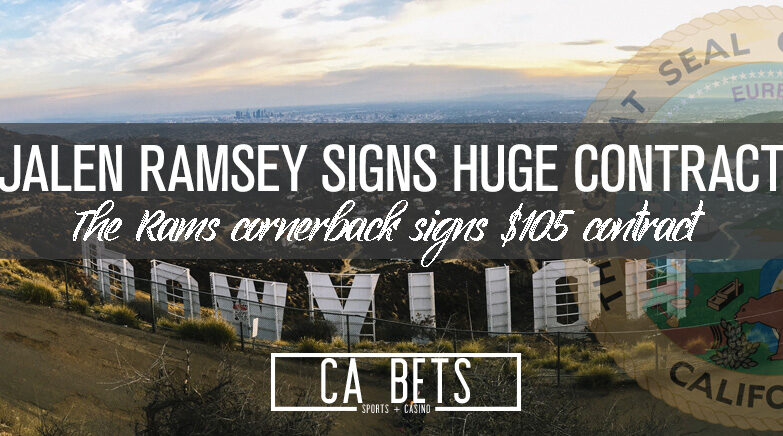 The week before the first game of the NFL season, Los Angeles Rams cornerback Jalen Ramsey signed a contract extension of five-years $105 million. The deal is the largest contract for a cornerback ever. First the first time in NFL history, a cornerback will be making over $100 million, that man happens to be Ramsey.

$71.2 million of the contract is guaranteed, which is also the largest amount of guaranteed money a cornerback has ever seen.

“I’m happy for Jalen, and I’m happy for our football team,” coach Sean McVay said Wednesday. “I think for him to be able to get that taken care of, you don’t have any sort of distractions in the background, so that’s a positive for us.”

The Rams have been on a huge spending spree over the last few seasons. Not only did Ramsey sign a record-breaking deal, but defensive tackle Aaron Donald, quarterback Jared Goff, and running back Todd Gurley all signed blockbuster deals with the Rams. Gurley was cut this offseason, however.

Since coming over to the Rams in a trade last season, Jalen Ramsey has been a huge part of the Rams secondary from day one. In 2019, he graded out as the 25th best cornerback in the NFL, according to Pro Football Focus.

Although he has seen his grade fall from his 2017 high of 91.3, where he was the highest-rated cornerback in the NFL that season, Ramsey is still a huge part of what the Rams are trying to do on defense.

With his time in Los Angeles last season, Ramsey only had one interception and four pass deflections. Although he is not the lockdown cornerback he was a few seasons ago, he is still a huge part of the Rams run defense on the outside.

Ramsey has also been reliable from a health standpoint. In the nine games he played for the Rams in 2019, he played 100 percent of the defensive snaps. Ramsey has a huge impact on the defensive back unit and deserves the $105 million extensions he got this week.

Now, it is time to see if he can live up to the expectations. He got the money, but that does not always translate to success. Ramsey needs to prove he is still one of the top corners in the NFL.

Can the Rams Win with Ramsey?

As of writing this, the Rams are +4000 to win the Super Bowl, according to DraftKings. Their win total also sits at an even 8 entering the season.

After suffering a Super Bowl hangover in 2019, there is no telling what Rams team we will see in 2020. The team has a ton of talent but last drew big question marks on whether it is sustainable or not.

Jalen Ramsey is a big part of the success too. In a division that has Debo Samuel, D.K. Metcalf, and now DeAndre Hopkins, Ramsey will need to be on his A-game, making sure that opponents’ top targets are not able to get theirs.

The Rams were in the Super Bowl two seasons ago and could make another run if the 2018 team shows up. If that happens, and Ramsey plays up to his level, then the Rams could be a tough out in the NFC.