Justin Herbert to Start against Carolina 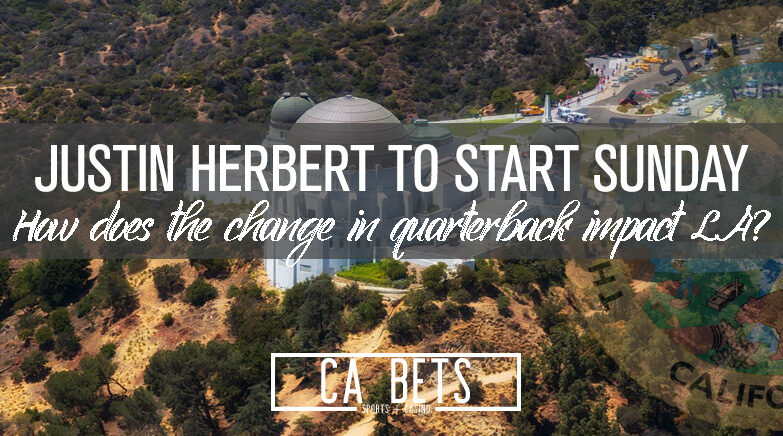 On Wednesday, NFL sources reported that Justin Herbert would start this Sunday against the Carolina Panthers.

The announcement comes hours after another report came out saying a Los Angeles Chargers team doctor accidentally puncture Tyrod Taylor’s lung after giving him a shot to help reduce pain with his bruised rib.

This happened Sunday before the start of the Chargers game against the Kansas City Chiefs, where Herbert made his first NFL start.

Herbert impressed in his NFL debut throwing for 311 yards, one touchdown, and one interception. The Chargers offense looked much more alive against the Chiefs defense than how they looked under Taylor against the Cincinnati Bengals one Week 1.

If Herbert can keep up the production, then the Chargers are a much better team moving forward and will hang around in the playoff race in 2020.

Justin Herbert was drafted sixth overall by the Chargers after NFL veteran Philip Rivers left for Indianapolis. Many were expecting Herbert to the Chargers Week 1 starter, but Taylor beat him out for the job.

In Week 1, the Charger barely hung on against the Bengals 19-16, with a mediocre performance by their offense. Head coach Anthony Lynn stuck by Taylor as the starter but was scratched last minute after suffering a chest injury.

In comes Herbert for his first career start, and the rest is history. The Chargers were able to move the football on a weak Chiefs defense, putting up 479 yards of offense and averaging 6.1 yards per play.

The Chargers were up 17-6 on the Chiefs in the third quarter before making their comeback and winning overtime.

In the last minute situation, Herbert stepped up to the occasion and almost helped the Chiefs pull off an insane upset over the Super Bowl Champions. Unfortunately, Herbert was not able to make enough plays down the stretch, and with a questionable fourth and one call late in the game, the Chargers fell on Sunday.

Overall, Herbert did look impressive in his first start and will have a chance to replicate that next week against the Carolina Panthers.

Can Herbert keep it up?

While everyone was watching the Chiefs and Chargers games, many fans were very impressed with what Herbert was able to do. However, some of the advanced metrics do not agree with Herbert’s Week 1 performance.

According to PFF.com, Justin Herbert ranks 31st out of 34th among quarterback performances. Not to mention, teammate Tyrod Taylor currently ranks 30th.

Right there says a lot about how well Herbert indeed played on Sunday. Herbert also had 126 completed air yards, according to Pro Football Reference. His receivers yards after the catch were 185, meaning that the Chargers receivers helped Herbert throw for over 300 passing yards instead of Herbert himself doing.

Herbert was also accurate for 80 percent of his throws, according to Pro Football Reference. 25 were on target, and six were poor throws.

Overall, the numbers on paper look pretty good for the rookie quarterback. However, when you dive a bit deeper, they are not as flattering as some may say. Fortunately, Herbert has all week to prepare and are also playing a Panthers defense that is not that great.

We will see if Herbert can pull off his first win on Sunday.