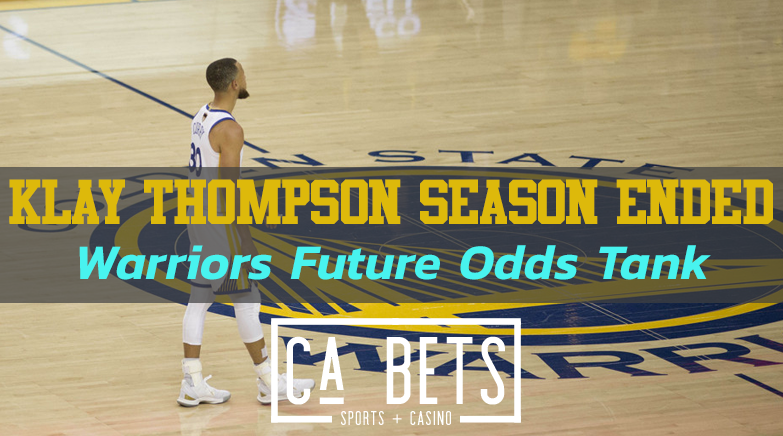 Klay Thompson, unfortunately, tore his achilles moments before the NBA Draft began last night. This is extremely depressing news for Warriors fans who have been dealing with injuries ever since the Finals in 2019. The 2019-2020 season was mostly a throwaway, and the team was gearing up for big things, looking like the 2nd or 3rd best team in the league. Now, despite adding the 2nd overall pick, James Wiseman, in the draft, nobody is feeling confident about the season.

The Warriors’ odds on DraftKings dropped from +800 to win the championship all the way to +2,000. A remarkable drop that highlights just how bad this injury is going to affect the squad. The chances of the Warriors winning the Western Conference went from +500 to +1,100. Bettors, which there were a lot of, who placed money on the Warriors this past month must feel like the wager is over before it ever began.

The team is still going to have a solid four of Curry, Green, Wiggins, and Wiseman during the season. I project the team will make a playoff push and compete well in the playoffs. However, without the lockdown defense that Klay Thompson provides and the over 40% shooting from three, it is very hard to see this team winning anything.

Many fans are already looking to the 2021 free-agent class and asking how the Warriors could add the Greek-Freak Giannis Antetokounmpo. This is a dream for fans, as a team with Curry and even a lesser Klay Thompson reining threes down from kick-outs, with Giannis driving, would surely be favored to win an NBA title.

The Lakers’ odds boosted for both the West and Finals with the Thompson news. The Lakers moved from +175 to +140 to be the champions of the Western Conference. Then, the Lakers’ NBA Finals Champions odds moved from +350 to +300. I think there is no doubt that this injury drastically increases the Lakers’ odds at winning. I do not think that the line even moved enough to fully represent the repercussions of Thompson going down.

The Warriors were always going to be the biggest threat to the Lakers, even if they were not second in odds for either the Finals or Western Conference. The way the Warriors are built when Thompson is on the court could shatter the Lakers in a seven-game series. I believe that this injury also hurts the Mavericks, Clippers, and Nuggets, as the Warriors were the best shot for the West to take down the Lakers.

The coming weeks will supply some data on where bettors are placing their money following the injury news. My bet is that it heavily falls on the Lakers. The percentage that Lebron and Anthony Davis’ team was bringing in when it came to sports betting handle was already astronomical, now it is going to be absurd with the odds moving only a few percentage points, but the real-life balance of power completely shifting.

We all hope for a full and speedy recovery for Klay Thompson. However, I would not be surprised if the Warriors still come out very competitive off the back of Curry willing this team to wins. However, the 2021 Draft and free-agency period are now at the forefront of many Warriors fans’ minds.