Lakers Guard Rajon Rondo out 6-8 Weeks with Fractured Thumb; How does this affect Lakers Title Odds 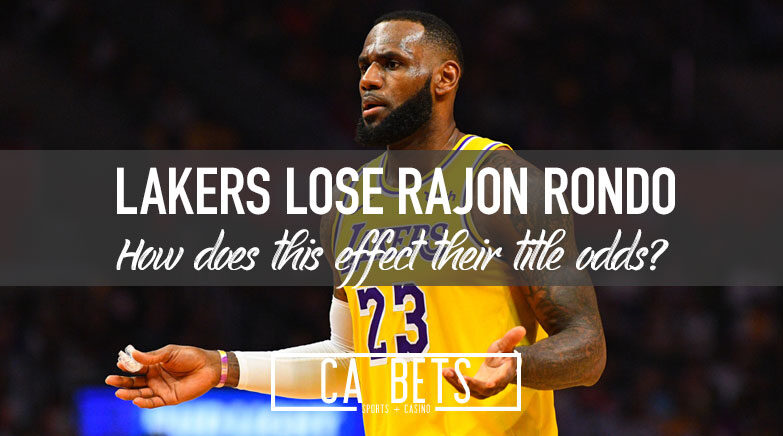 Los Angeles Lakers guard Rajon Rondo suffered a broken right thumb in practice on Sunday, sidelining him for six to eight weeks. Rondohave surgery on the thumb this week and will be able to return to basketball activities this fall.

The four-time all-star is averaging 7.1 points, five rebounds, and three assists per game. Rondo has played in 48 games this season, and primarily coming off the bench for Lakers.

L.A. is already suffering from guard depth going into the Orlando restart. The Lakers lot Avery Bradley after he decided to opt-out of Orlando due to coronavirus concerns with his family. Now, Rondo will be unavailable in Orlando. L.A. signed former Lebron James teammate J.R. Smith to help with depth.

Who Needs to Step Up?

Newly signed J.R. Smith will be one of the players that will need to have an immediate impact for the Lakers. Smith was signed to the Lakers last month after Avery Bradley announced he would not be traveling with the team to Orlando.

After Rondo went down with his thumb injury, Smith’s role will be that much more important for the Lakers championship run. Smith has averaged 12.5 points per game over his career and will need to put up similar numbers in the Orlando bubble.

Another name to look for during the Lakers run will be Alex Caruso. Despite seeing his minutes drop a bit as the NBA season came to a halt, he will have a bigger role moving forward with the absence of Bradley and Rondo.

Caruso has had big games this season and dropped a season-high of 16 points one game. He currently averages 5.4 points per game but has played in 54 games. Caruso will be expected to step on the defensive side and also take advantage of his skill set to make up for the depth L.A. is losing heading into Orlando.

A final name NBA fans should look at is Kentavious Caldwell-Pope. He has averaged 25.4 minutes per game but is only scoring 9.5 points per game. Caldwell-Pope will need to play a bigger role to help relieve pressure on Lebron James and Anthony Davis. Caldwell-Pope has the third most minutes played this season, and will need to become more productive during that time if the Lakers want to make a title run.

How Does this Affect Lakers Title Odds?

As of writing this, the Lakers are +260 to win the NBA championship this year, according to FanDuel. The injury of Rondo hurts the Lakers a lot more than expected. Rondo has been known historically to produce double-digit assist games in the playoffs, which would have made him a big threat to go along with Davis and James.

Bradley and Rondo combined for 15.7 points, 6.3 assists, and 5.3 rebounds per game. Now, Smith, Caruso, and Caldwell-Pope will need to help produce those numbers if the Lakers want to get to the finals.

James will obviously step up in the loss of Rondo and Bradley, and will most likely become the point guard for L.A. The long layoff will also help the 35-year-old veteran feel fresh during a playoff run.

There is a chance that the injury to Rondo will not have a huge effect on the Lakers’ chances of winning a title. They also brought in Smith, who was teammates in Cleveland with James, so there is some familiarity with the Lakers star.

However, there is a chance that there could be another injury depending on how in-shape players are. The long layoff could have made players take time off instead of preparing for the NBA season. If another injury does happen to the Lakers, then it could put their title odds in jeopardy. For now, expect James and company to make another title run despite losing Rondo.