Los Angeles Angels Affect by Tropical Storm; How Does this Affect the Odds? 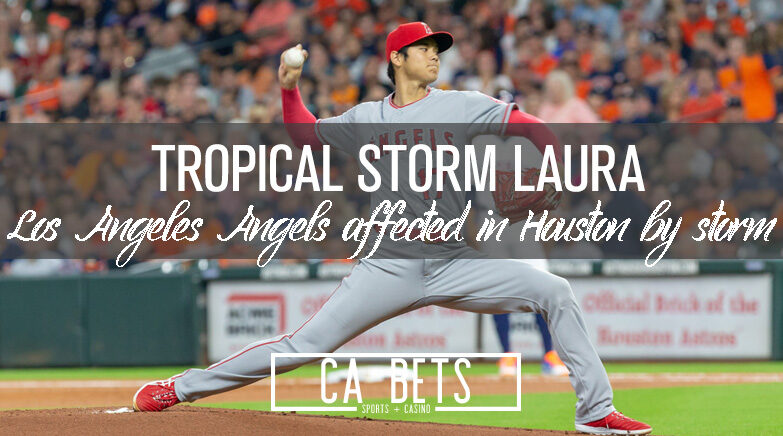 On Monday, it was reported that the Los Angeles Angels and Houston Astros would play a doubleheader on Tuesday due to Tropical Storm Laura expecting to hit the coast later this week.

The Astros-Angels game from Houston on Thursday has been moved to Tuesday as part of a doubleheader due to the potential impact of Tropical Storm Laura, which is projected to become a hurricane upon landfall. Wednesday’s night game has been moved up to noon.

The Astros and Angels were supposed to play a four-game series through Thursday, but that has now changed with the weather. The Wednesday game between the two teams will be moved up to noon local time.

The doubleheader will feature two seven innings games on Tuesday, as the teams will play roughly 23 innings of baseball in 24 hours. The Angels will try to be out of Houston before Tropical Storm Laura – which is looking to become a hurricane – makes landfall this week.

Although the Angels may get out of Houston in time, the Oakland Athletics are expected to travel to Houston for a three-game series this weekend. The A’s are in Texas playing the Rangers this week.

Jose Suarez will take on Cristian Javier in-game on of the doubleheader. Houston is the favorite in that game with a -152 moneyline compared to +130 for the Angels. The total is a bit high at 8.5 runs, which is surprising for a seven-inning game.

Houston should see Suarez well as the offense rank seventh in wRC+ and eighth in wOBA.

As for the Astros Javier, he has been slightly lucky this season with a 3.55 ERA but a 4.58 xFIP. The numbers suggest regression is possible this season. The Astros rookie has yet to face this Angels lineup that is sixth in wOBA and wRC+ against righties.

The 8.5 makes sense, given the offensive splits against the opponents’ pitchers. Not to mention both bullpens are brutal with an xFIP that ranks in the bottom 10 of the league. The numbers suggest a decent amount of runs be scored in Houston for game one.

Game two starters are not set in stone just yet. The Angels are expected to go with Julio Teheran later on Tuesday, and Astros manager Dusty Baker plans to have a bullpen game for the second matchup.

Although odds are not out yet, the matchup should see a good amount of runs as Teheran has an xFIP above six in 2020, and the Astros bullpen is still bad.

Los Angeles 2020 is not going as planned. Before the 2020 season began, the Angels’ chances of making the playoffs were over 50 percent. Now, after a 9-21 start and halfway through the season, those odds have dropped to 6.7 percent, according to Fangraphs.

The Angels pitching has been awful outside of Dylan Bundy. He currently posts a 2.58 ERA and is the only qualified starting in terms of innings. The next best starter this season would be Griffin Canning, who has a 4.88 ERA.

The numbers are not great when trying to win the game. Their bullpen is just as bad as well with a 4.57 ERA. Two-way player Shohei Ohtani hurt his arm again pitching this season and might have his best days on the mound behind him.

The offense is still solid with Mike Trout and newly added Anthony Rendon in the middle of it. However, when the pitching is not there, it is hard to win games.