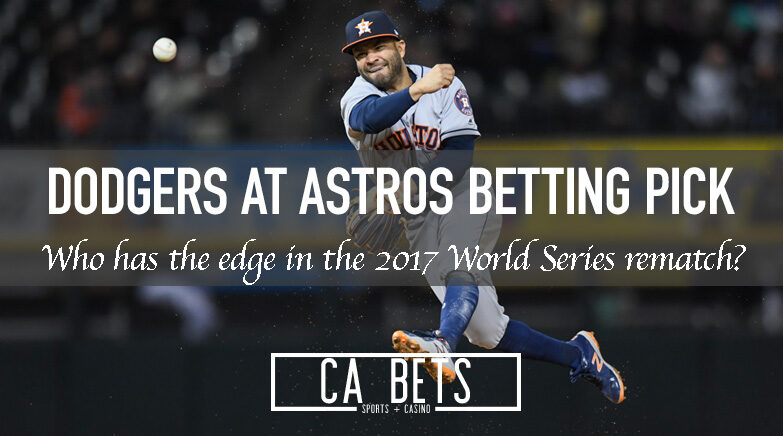 The Astros and Dodgers kicked off a two-game series on Tuesday in Houston. As expected, there were fireworks in the 2017 World Series rematch. In the bottom of the sixth, Dodgers pitcher Joe Kelly threw behind Astros Alex Bregman and Carlos Correa.

Kelly struck out Correa to end the sixth when Kelly proceeded to taunt to Astros dugout. The benches cleared, but social distancing was maintained between both teams. There was some bad blood between the two; especially, it is now known the Astros were using devices to cheat during the 2017 and 2018 seasons.

Now, the two teams get to do it all over again today.

The Dodgers come into this game 3-2 in the early season and will start Dustin May, who is the Dodgers number on pitching prospect. In May’s first 2020 start, he went 4 1/3, only allowing one run and had a 2.44 xFIP. May has seen early success in his 15 career appearances. Despite an 8.31 K/9, his xFIP sits at 3.56. May will be a tough test for the Astros as his fastball can hit the upper 90s. The Dodgers bullpen also has the edge over the Astros and should be able to deploy their better arms in the matchup.

The Dodgers offense has picked up right where it left off from last year while also adding Mookie Betts into the mix. Last night, the Dodgers scored five runs in the fifth by singling the Astros pitching staff to death. L.A. has made some of the hardest contact with pitches season, which will always help with getting on base. This offense will get a chance to go at Astros rookie pitcher Cristian Javier, which could cause trouble for Houston. The Houston bullpen has been struggling this season, and something Los Angeles will take advantage of.

Houston will start their highly touted pitching prospect Cristian Javier, who is the sixth-best prospect in Houston’s organization. Javier made his first appearance last week in one innings worth of work against Seattle, allowing one hit and striking out one batter. He does no the easiest task in his first start going up against the Dodgers. Javier will need to have a great first career start against one of the best offenses in baseball. Houston also has one of the most inexperienced bullpens in baseball. The Astros only have three relievers who have more than one year of MLB experience.

Houston is proving they don’t need trash cans to win baseball games in 2020. Their offense did not drop a beat to start this season, posting a team wRC+ of 126. The Astros offense is still one of the best in baseball and will have a chance to take advantage going up against rookie Dustin May in tonight’s matchup. Houston should be able to take advantage and will want to do so after how last night’s game turned out. However, they will not have George Springer in tonight’s contest, so expect Myles Straw to get some time in center field.

This game is a coin flip with two of the best pitching prospect going head to head. Both starters have tough matchups against the respective offenses. However, the biggest difference will be with the Dodgers bullpen. They went through a lot of their big arms last night and will have to use other guys in tonight’s game.