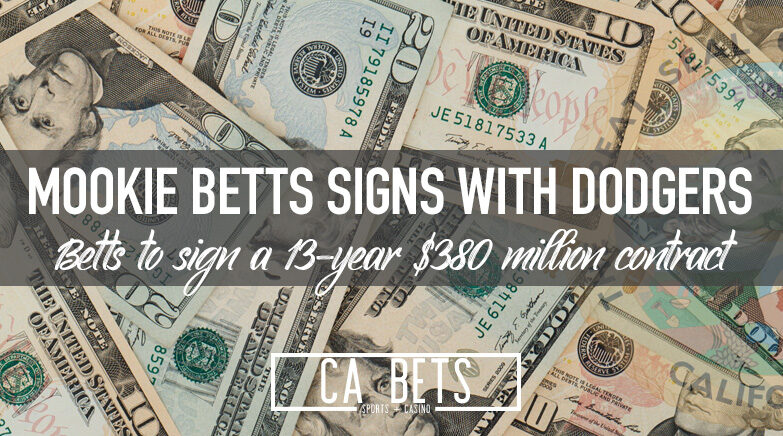 The Los Angeles Dodgers are closing in on signing superstar Mookie Betts to a 13-year $380 million deal. The deal would keep the former American League MVP from heading into free agency this offseason. When it’s complete, it will be the second-biggest deal with a total value in MLB history.

How Good is Betts

In his five and a half year career, Betts is already a proven superstar at the ripe age of 27. Betts is a four-time All-Star, four-time Gold Glove right fielder, three-time Silver Slugger, and won the 2018 AL MVP award. He currently posts a career .301/.374/.519 slash line.

Even in a shortened 2020 season, Betts will make a significant impact on Los Angeles. ZiPS projects him to post a 2.3 WAR while also hitting 13 home runs. The Dodgers lineup will also make it impossible to work around Betts.

With guys like Justin Turner, Max Muncey, and Cody Bellinger in the mix, opponents will have no choice but to go right through the Dodgers lineup. Adding Betts makes them an even scarier opponent, especially adding in the fact they have won the N.L. West for seven straight seasons.

Betts ranks 15th in WAR among active players while only playing five and a half seasons. Only Mike Trout can say he’s had a better start to his career amongst the group. As of writing this, Mookie Betts lead all National League players to win MVP at +600 odds, according to FanDuel.

Will the Dodgers Win with Betts?

The Dodgers have been unable to get over the World Series hump during their seven-year dominance. Los Angeles has made it to the World Series for two of the last three seasons, and Betts could help the Dodgers get there again this season.

Adding an MVP to the roster is never a bad thing either. The Dodgers now have two MVPs roaming the outfield, making it one of the best in the league. Betts could be the piece L.A. needs to win it all for the first time since 1988.

The Dodgers have failed to have playoff success over the last seven years, and things could change in a shortened 2020 season. Right now, Los Angeles is the favorite to win the World Series at +380 odds. The Yankees are behind them at +400, followed by the Astros at +800.

Overall, Betts will make a great impact for L.A. However, they will need to keep retooling their roster as 2019 MVP Cody Bellinger will head to free agency after 2023, and Walker Buehler is off the books in 2024. If the Dodgers can sign their young superstars to long-term contracts, then this team will continue its National League dominance.