Los Angeles will most likely finish the season as the one seed as they have dominated the NBA. The offseason addition of Anthony Davis has been a significant boost to their squad as he averages 26.7 points, 9.4 rebounds, and 3.1 assists per game.

The Lakers have the second-best odds to win the NBA title but will have a bit of adversity to overcome during the restart. L.A. will be without guards Avery Bradley and Rajon Rondo, in Orlando. Bradley announced that he is opting-out of the rest of the season, and Rondo will be on the sidelines for six to eight weeks due to a hand injury.

The Lakers did bring in Dion Waiters and J.R. Smith to help with depth but also need other players on the roster to step up. Laker fans can expect guys like Alex Caruso, Kentavious Caldwell-Pope, and Danny Green to help fill the roles of Bradley and Rondo.

Despite the injuries to key role players, the Lakers have a guy names Lebron James on their roster who should also help this team overcome some obstacles. James has made it to the NBA finals in eight of the last nine seasons, so the Lakers are put in an excellent position to get there again in 2020.

L.A. currently sits at +260 to win the NBA Title, only second-best odds behind the Milwaukee Bucks. The Lakers have one of the toughest schedule remaining as seven of their last eight games are against playoff teams. The tough schedule should help the Lakers prep for a title run playing NBA’s best competition.

Lebron James has not been to the NBA finals in the last eight seasons his team made the playoffs. The rest the veteran had off will also help him feel 100 percent during the restart, which is something to consider while betting the remaining NBA season.

This might be the best number to grab the Lakers at if you think the Lakers will win it all at the end of the year. Home-court advantage will not matter in Orlando, but the Lakers will most likely make it to the conference finals at worst. If they do, then they will be the favorite, and most likely will not be +260 if they faced the Bucks. I would take a stab at +260 for the Lakers to win it all if you like them.

Some sportsbooks also have win totals for the eight remaining NBA games. The Lakers sit at 5.5 wins with +100 juice on the over. This makes sense as the Lakers could clinch the one seed by game three as they have a 5.5 game lead over the Clippers for the top spot. If they beat the Clippers in the first game, then they will have a 6.5 game lead with seven games remaining.

A win would give them a chance to clinch early, and let the Lakers rest their starters to reduce the risk of injury. 5.5 wins feel like a good number, but I would lean towards the under, especially with the lead and schedule they have remaining.

The Lakers have the fourth toughest schedule remaining for the 2020 season and good reason. They are the best team in the Western Conference and second-best in all of basketball. The tough schedule will get them ready for an NBA as they play top competition.

However, even with the tough schedule, they have an opportunity to coast and rest players for the NBA playoffs. In their first game back, the Lakers will play Clippers, who they have a 5.5 game lead over for the one seed. If they win that game, then they will be 6.5 games up with seven games remaining. Even with the tough schedule, the Lakers could coast and get their team ready for a playoff run.

They have new guys added to the roster in J.R. Smith and Dion Waiters, who will need some time to work into the rotation. Clinching the one seed can give guys like Anthony Davis, and Lebron James extra rest before the playoffs begin. The Lakers will be able to use the remaining games to see how everyone’s role will play out moving forward.

Overall, the schedule is unprecedently tough. Los Angeles faces the Clippers, Nuggets, Jazz, Thunder, and Rockets, who currently hold seeds two through five in the Western Conference. Then play the Raptors and Pacers from the East, who are both in the top five of their conference.

Although the schedule is tough, the Lakers can make it a lot easier on themselves if they can beat the Clippers in game one, which will help them moving forward with resting players and figuring out their lineups moving forward.

Los Angles has been having a great season thanks to their performance on both sides of the ball. They rank in the top five in offensive efficiency and offensive efficiency. There is the obvious reason to rank in the top five when you have guys like Anthony Davis and Lebron James on your team. Davis and James have a combined player impact estimate of 38.3, according to NBA advanced stats.

The two are the reason why the Lakers are so successful this year. Los Angeles will live and die by their productivity going into the 2020 playoffs. They do have quality role players around them, however. JaVale McGee and Dwight Howard have been a great compliment to Davis in the frontcourt.

This helps guys like James and company handle the perimeter, which makes guarding them that much more difficult. Another quality role player for this squad was Rajon Rondo. However, Rondo went down with a thumb injury during the ramp-up to the 2020 season.

The Lakers’ biggest question mark will be their depth. L.A. will be without Rondo and Avery Bradley for the remainder of the 2020 season. Depth will be a focus for how far the Lakers will go in the playoffs. They still have quality players in guys like Danny Green, Alex Caruso, and Kentavious Caldwell-Pop to fill the roles. Los Angeles also brought in J.R. Smith and Dion Waiters for depth.

The biggest question will be how well the Lakers will be able to find a solid rotation of guys to make a run at a title. Everyone knows James will step up his game come playoff time, but there will be moments when he will need help from role players in big moments.

If the Lakers can find depth in their Orlando roster, then they will have a great chance to win the title. 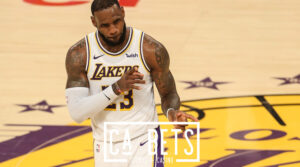 Overall, it is arguably the Lakers’ title to lose at this point, thanks to Lebron James and Anthony Davis. The Bucks are still the favorite to win it all, but James gives this team so much more experience moving forward.

Yes, they still have to deal with the Clippers in the West but have a slight edge over their roster. If L.A. can figure out their depth and rotations, then they will be poised to make the finals.

The Lakers sit at +260 to win the NBA title, and that number will most likely be the best one any bettor sees in the final part of the 2020 season. I would take a stab at that number if you like the Lakers to win it all. Lebron has been to eight straight NBA finals when he makes the playoffs, and there is a good chance he’ll do it again.

Can the Lakers beat the Clippers in a Game 7?

What is the Biggest Challenge for the Lakers?

The biggest challenge is the Lakers’ depth. Heading into the Orlando bubble, they are without guards Rajon Rondo and Avery Bradley for the restart. The lack of talent at guard could hurt their chances at a title. However, James should takeover the offense despite losing two key guards.

James can still play 48 minutes, although it will not be ideal for the Lakers. Even though he is their best player, James still needs time to rest, so he can be used more effectively in tight games, and in the fourth quarter. James’ production will drop if he were to play all 48 minutes.

How can the Lakers win the NBA title?

They can win an NBA title by relying on Davis and James to carry the team. The duo is one of the best in the NBA and will need them to step up during the playoffs. They will also need Danny Green and Kentavious Caldwell-Pope to step up as role players as well.

Who is the Lakers best player after Lebron James and Anthony Davis?

Danny Green is most likely their most important player behind James and Davis. Green is a pivotal role player whose stats do not necessarily show how vital he is. Green is a very good defender that will be able to lock down whoever they need him to guard.