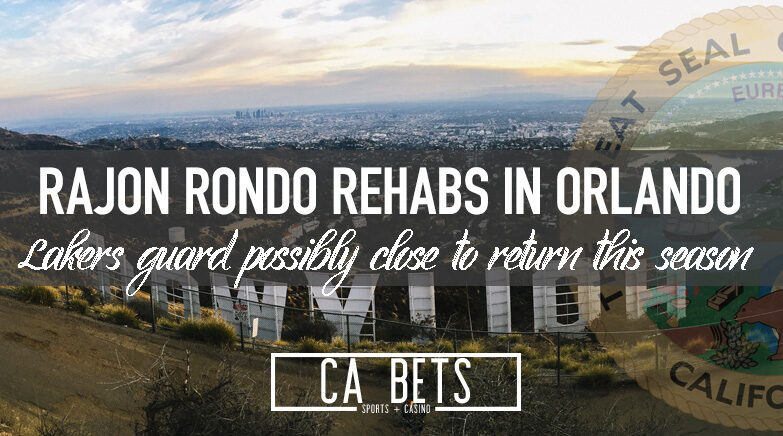 Los Angeles Lakers guard Rajon Rondo is making his way back towards the NBA bubble this week. Rondo left after suffering a fractured right thumb during the restart of the NBA season. Now, after already missing three weeks, Rondo looks to return to the team before the season is over.

As of writing this, there is no timetable for Rondo, although it is encouraging for the Lakers that he is going to finish his rehab near the NBA bubble. The timetable originally set was a six-to-eight week recovery. If Rondo is closer to the six-week side, then he could be back in time for the second round of the playoffs.

Rondo back in the lineup will help the Lakers’ depth moving forward. The 34-year-old was averaging 7.1 points and 5 assists per game this season.

The Lakers Without Rondo

The Lakers are 2-1 since the season restarted and clinched the number one seed in the West. Rondo has seen his minutes absorbed by Alex Caruso, Deion Waiter, and J.R. Smith coming off the bench.

The trio has played well in the absence of Rondo, but Lebron James and company would like Rondo back in the rotation as he adds an extra element on both the offensive and defensive side.

A majority of the contribution has been between Lebron James and Anthony Davis through the three games. Caruso and Waiters have had double-digit games coming off the bench, however, that game resulted in a loss.

Rondo will be able to help the Lakers facilitate the offense more and James and Davis play more traditional roles. If Rondo is average 20 or so minutes off the bench, then he can distribute the ball more to James and Davis as they are in roles to help the team excel.

Rondo is not the same player he was five or six years ago. However, he is still a quality role player that will help the Lakers compete for a championship when healthy.

As of writing this, the Lakers are +260 to win the NBA title, according to FanDuel Sportsbook. Los Angeles does have one of the best teams in the NBA bubble. If they are to add Rondo back into the mix, then this will only boost their odds.

With the one seed already clinched out West, expect the Lakers to start resting James and Davis and getting some of their role players in the mix. These next five games should help veterans stay fresh, even though they have been fresh since mid-march.

Rondo has been solid off the bench this year when facilitating the offense. If he can get back to the team by the first round of the playoffs, then they should be solid throughout.

There could be possible ease back into the rotation given the circumstances. Rondo should also test every day so his quarantine timeline is much smaller when he is ready to return. Overall, Rondo trying to get back to the Lakers this year is a big step.

If he did not have a chance of returning, he would not be rehabbing near the NBA bubble. Expect a much clear timetable for Rondo’s return in the coming weeks.