Los Angeles Rams vs. Miami Dolphins: Do You Back the Rams on a Short Week? 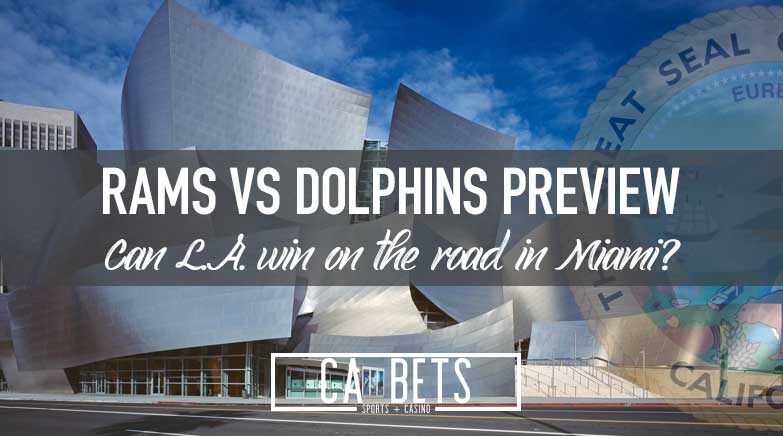 The Los Angeles Rams head out to Miami to take on the Dolphins. The game will be played at 10:00 AM PT, which could be tough for Los Angeles, given that the Rams played on Monday night and now have the early game on Sunday.

Miami is coming off its bye and will have Tua Tagovailoa starting at quarterback this Sunday. This will be Tagovailoa’s first NFL start.

The Rams should be a public favorite this Sunday on the road, which is never promising for square bettors. Miami will also be well-rested thanks to the bye week, so this is a perfect storm to back the hometown dog. All eyes will be how Tagovailoa performs on Sunday.

The Rams come into the game 5-2 after basically beating up on the NFC East and the Bears last Monday night. The Dolphins have been playing competitive football as they sit at 3-3 on the season, looking to get over .500 as the NFL nears the halfway point.

The Rams 5-2 feels a bit inflated with their best win this season came against a Bears team just as fraudulent. Los Angeles’s next four wins came against the NFC East, which has a combined record of 7-20-1 on the season.

The Rams are the seventh most efficient team in the NFL this season with a top-10 offense and a defense that ranks 11th. Again, the schedule has helped them, considering their two losses came against the Bills and 49ers.

The Dolphins have had a much more difficult schedule thus far this season. Yes, their three wins came against the Jaguars, 49ers, and Jets, but have played tight games against New England, Seattle, and Buffalo. They are also 13th in team efficiency in 2020 and have an offense and defense rank in the top half of the NFL.

The difference on Sunday will be how quarterback Tua Tagovailoa will play in his season debut. The Dolphins made the switch after their last game against the New York Jets two weeks ago. Tagovailoa played only two minutes, so this was most likely a decision made before the Jets game to start after the bye week.

Ryan Fitzpatrick was playing solid football this season as he ranked 17th among quarterbacks. That is pretty good for a team like the Dolphins, but Tua must have had a great offseason and practices for Miami to make a move when Fitzpatrick wasn’t playing bad.

The situational spot is great for Miami this weekend. The Rams are coming off a huge win over the Bears on Monday night football, only for them to have to turn it around in the early matchup in Miami on Sunday.

As of writing, the Rams have 57% of the bets coming in of them this Sunday. Public road favorites never go well when backing a team like Los Angeles, so everything from a situational standpoint says Miami.