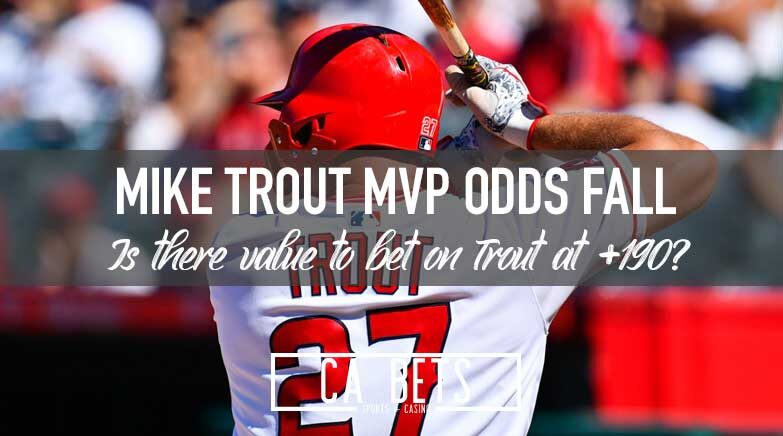 Trout has never finished outside the top five in MVP voting in his career. He also might go down as arguably the best play of all-time, and the best player of this generation. Trout puts up video game numbers consistently and has already won three MVPs because of it.

Now, Trout’s MVP odds are sitting at +195, which might be enticing to take a stab at for someone who has finished worse than second in MVP voting once in his career.

Why Bet on Trout?

Mike Trout is the greatest baseball player of this generation hands down and is on pace to become the greatest player of all-time. Only one time in his career had finished farther than second in MVP voting, which came in 2017 when he only played in 114 games due to injury.

Also, he is coming off a 2019 MVP campaign, which was also cut short due to injuries. However, Trout still played in 134 games, which was enough for voters to crown him Most Valuable Player. Trout’s career .305 batting average and 1.000 OPS is enough to show he will be in the MVP voting every year if he stays healthy.

Trout has hit over 30 home runs in six of his eight seasons and scored over 100 runs in seven of them. Also, Trout has only had a WAR lower than eight just once in his career, which came in his injury-shortened season in 2017. With only 60-games to work with, Trout could be the only player who has a WAR over three.

With odds at +195, it makes it hard to pass up a bet on baseball’s best players. There is a good chance that Trout finishes the top two again this season, which will keep him in the running for MVP.

Why to Pass on Trout

Betting against the best player is tough to do. However, in a shortened season, this might be the year to do it.

60 games is small sample size for the MLB. There are several times where players and teams start the season as one of the best in the MLB, only to fade as the next 100 games catch up to them. What makes Trout such a good candidate is that he is consistently great for a full season.

Now, there is a chance that someone has a great 60-games only to take the MVP crown away from Trout. No one comes close to Trout’s +195 MVP odds, but that might be in favor of a bettor looking at a longshot.

One name that pops out is Giancarlo Stanton, who is +3000 to win AL MVP. Stanton won NL MVP in 2017 and finished in second in 2014. There is a chance in a shortened season that a healthy Stanton can have an incredible 60-game stretch that leads him to the crown.

Other names like Matt Chapman (+1800), Jose Ramirez (+2500), and Joey Gallo (+4800) all have been known to go through great stretches in a season. Suppose there is a year to bet on a longshot, its in 2020. There is no telling what will happen, and all it takes is for one guy to stay hot all year.