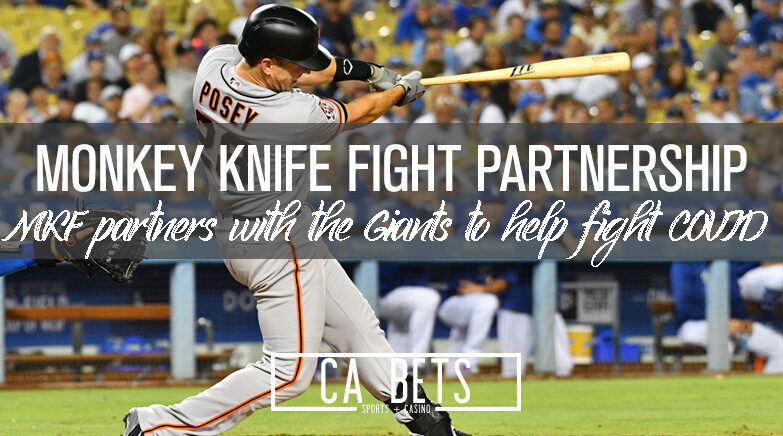 Monkey Knife Fight is finding a stronghold in the California fantasy sports market, and on Friday it got even stronger. The daily fantasy sports company partnered with the San Francisco Giants and also will be donating $50K to the Giants Community Fund.

The Giants Fund is there to help families that have been hurt bad the coronavirus pandemic that broke out in the U.S. in March. The partnership will include signage in the outfield of Oracle Park where the Monkey Knife Fight logo, Furious George, will be displayed.

“Monkey Knife Fight needs to give back to our communities, especially those that struggle with access to resources,” said Bill Asher, Founder and CEO of Monkey Knife Fight. “The Giants Community Fund does amazing and impactful work in San Francisco and throughout Northern California, and we wanted to be a part of that.”

Although this is not the biggest groundbreaking partnership, it still has a lot more meaning behind, especially helping families in need during unprecedented times.

The biggest part about the donation is that every time a player hits a home run onto the Monkey Knife Fight “Hit It Here” tarp, the daily fantasy sports company will donate $10K to the Giants Community Fund. Monkey Knife Fight has also pledged to donate at least $50K if there are not more than five home runs hit onto the tarp.

“The San Francisco Giants are proud to partner with Monkey Knife Fight at Oracle Park this season and showcase their innovative gaming platform to our fans,” said Jason Pearl, Senior Vice President and Chief Business Development Officer of the Giants. “We are thankful for the generous support Monkey Knife Fight will provide to the Giants Community Fund, which will help those most in need in our community during these difficult times.”

COVID-19 has taken a brutal hit on California as the state has the most cases in the U.S. The Bay Area has been more fortunate than other parts of the state, as the pandemic has not hit the area as hard. However, families are still struggling given the circumstances the virus has put them in.

Fortunately, Monkey Knife Fight wants to help in whatever way they can to make sure that families in the area can get through tough times.

Monkey Knife Fight has made a strong presence in the Golden State. Earlier this summer, MKF formed a partnership with the Los Angeles teams like the Kings and Galaxy at their respective stadiums. Now, they are heading up the coast to help families in need in the San Francisco area. Although the partnership is temporary, they will still show the community that MKF has their support even in tough times.

MKF is out here playing chess while everyone plays checkers, and that alone should be applauded.