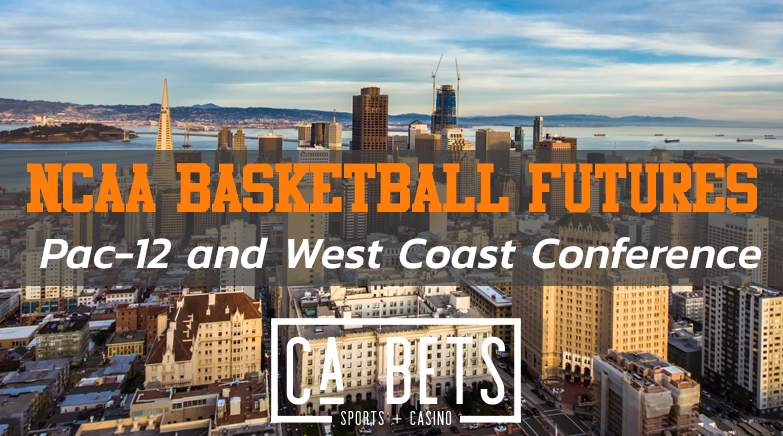 NCAA Basketball is finally starting up. With the pandemic slowing down a lot of our normal lives, it is nice to see that college basketball should be able to return. However, it is important to note that collegiate football, specifically on the West Coast where there are stricter guidelines, has had a lot of issues and suspended games. This means that it may not all be smooth sailing for NCAA Basketball, but the season is going to go ahead and begin this weekend.

With the games starting up, it is good to check on where the future bets currently lie. There are two massive conferences for basketball on the West Coast, the PAC-12 and West Coast Conference.

The pandemic is going to force much of the season to be played intraconference, so these games and standings are going to be more important than ever when it comes to college basketball.

The current Pac-12 favorite, at +260, is the historic UCLA Basketball Team. The team is far and away the highest-rated California squad in the Pac-12, with only Stanford coming near them in odds to win the conference at +600. However, looking at the makeup of these two-teams, UCLA is by far the best team.

UCLA will likely be a team that can compete in the NCAA Tournament at the end of the year. While DraftKings does not have championship odds up for the entire country, UCLA has to be one of the only schools, besides Arizona State and maybe Oregon, who would be worth a bet on a national scale when looking at the Pac-12.

The other California squads of USC and CAL both have subpar teams, with UC Berkeley coming in at an atrocious +10,000 to win the conference. The team is bad, and in recent years has been historically awful. Hopefully, we can see some improvements from both these squads.

The West Coast Conference has been fantastic in recent years, and a lot of that has to do with the -1,000 favorites, Gonzaga. Gonzaga is the number one team in the entire nation at the time of writing this article. No other West Coast Conference team is ranked; however, that does not mean that these teams are not worth a look at.

The University of San Francisco (USF) and Saint Mary’s are both decent squads who can surely end the year top-25 in the nation. Their odds come in at +900 and +1,000, respectively. While it would be an enormous upset for either of the teams to challenge Gonzaga at any point in this season, there is talent and a great core built for both of these Northern California teams.

Gonzaga, who will be National Title favorites if the season goes the way that experts see it as, will be leading both the Pac-12 and West Coast Conference when it comes to ability and talent. However, do not count out UCLA, and I do believe that both USF and Saint Mary’s have outside chances of being NCAA Tournament Cinderella stories come March.