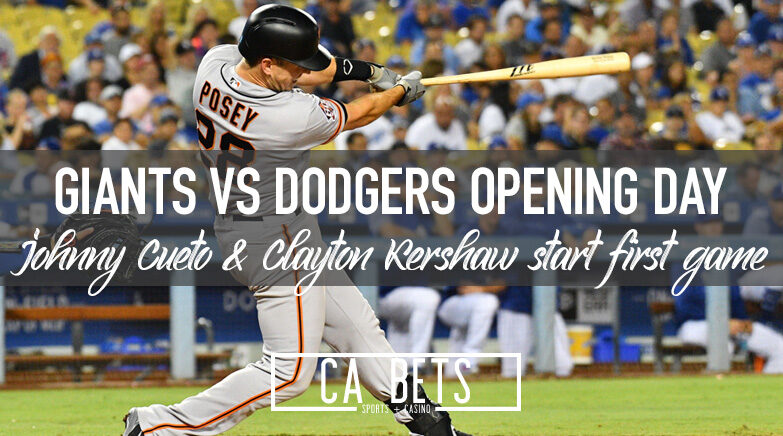 The Giants and Dodgers are the second game in an opening day, which will also feature the Nationals and Yankees in the first game. MLB’s opening day is July 23.

FanDuel already has odds listed for the opening day matchups. Right now, the Dodgers are -290 ML favorites over the Giants who sit at +245. The over/under for the game is 8 with -116 juice on the under.

The Dodgers come in as the heavy favorite into their opening day matchup with the Giants and rightfully so. Los Angeles has won seven straight NL West titles and is one of the favorites to win this year’s World Series. San Francisco comes into this season at +8000 odds to win the NL West.

As two teams in opposite directions, this makes for a lopsided matchup and series to start the season. In 2019, the Dodgers had a wRC+ of 111 compared to the Giants’ dismal 83. The Dodgers lineup is loaded from top to bottom, and they brought in superstar Mookie Betts in a blockbuster trade this offseason.

The matchup is not great for Cueto. In the last two years, the veteran pitcher has only started 13 games and only pitched in four games last season. Cueto’s numbers had fallen off from his 2016 season when he posted a 4.9 WAR. Cueto is a veteran and knows how to pitch in big games. The extra time off could help him in this opening day matchup, but going up against the Dodgers lineup is not going to be easy.

As for the Dodgers, Clayton Kershaw has been their ace for the last decade. Kershaw has put impressive numbers over the last few years, even as he ages on the wrong side of 30. Last year, Kershaw posted a 16-5 record with a 3.03 ERA. He is going up against a Giants lineup that is past their prime and at the start of a rebuild. Not to mention, San Francisco will be without veteran catcher Buster Posey. There is not much evidence that the Giants will be able to improve from their terrible offensive year in 2019.

Two clubs are in different directions going into 2020. As of writing this, the Dodgers are +380 to win the World Series, who have the best odds to win, according to FanDuel. San Francisco, on the other hand, is +3000, tied for the worst odds in the MLB.

Los Angeles is gearing up for another World Series run after bringing in Mookie Betts this offseason. They have the best lineup in baseball and a reliable pitching staff that can make it the distance.

As for San Francisco, expectations are low as they begin their rebuild. Their win total currently sits at under 25.5 with -164 juice on the under.