Week 4 NFL Lines; Do you back a California Team? 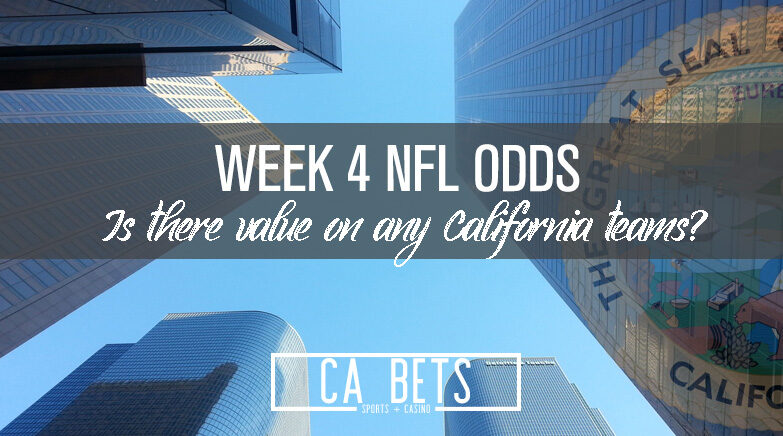 Week 4 of the NFL season is here! We are almost a quarter of the way through the season. I know, sad. On the bright side, we still have 13 weeks left! The Rams and 49ers both sit at 2-1 as the Chargers are 1-2. All three matchups are interesting for the NFL teams in California, so let’s get into it.

One of the most lopsided matchups of the weekend comes between the Giants and Rams this Sunday. The Giants have not been able to figure anything out in the early part of the season, as the Rams are coming off a tough loss after coming back from 28-3. Even as bad as the Giants are, double-digit spreads are always tough to cover, especially in the NFL. The Rams should be fired up for this game after letting one slip in Buffalo. The Giants need to come up with something quick as their season is spiraling quickly.

A struggling Philadelphia Eagles team will be taking on a banged-up San Francisco 49ers team. As bad as the Eagles have been, but the 49ers’ injuries should affect this week. San Fran was in New York last week against the bad Giants team and dominated with multiple key players out. The Eagles aren’t playing well, but they are not as bad as the Giants. The injuries will eventually catch up to the Niners unless guys like Jimmy Garoppolo and Raheem Mostert can come back soon.

After almost knocking off the Chiefs at home in Week 2, they took a tough loss on Sunday against the Panthers this past week. They now have to travel across the country to play a hot Tampa Bay Buccaneers team. So let’s bet them! The Chargers are not as bad as last showed, and the Buccs are not as good as what the last few weeks have shown. The Chargers should be able to stay within the +7. If LA can limit Brady, then this will be close.

Given the injuries on both sides, it’s hard to see how 46 points get put up on Sunday night. The 49ers are still without Garppolo and Raheem Mostert. George Kittle is getting healthier, but there is no say that he is 100 percent. The Eagles had one healthy receiver practicing this week, so that makes moving the football much more difficult for a struggling offense. Both defenses rank in the top half in efficiency, with the Niners ranking fifth in defensive efficiency. Expect a low scoring Sunday night matchup.