Week 5 NFL Lines; Which Team from California is Worth Backing? 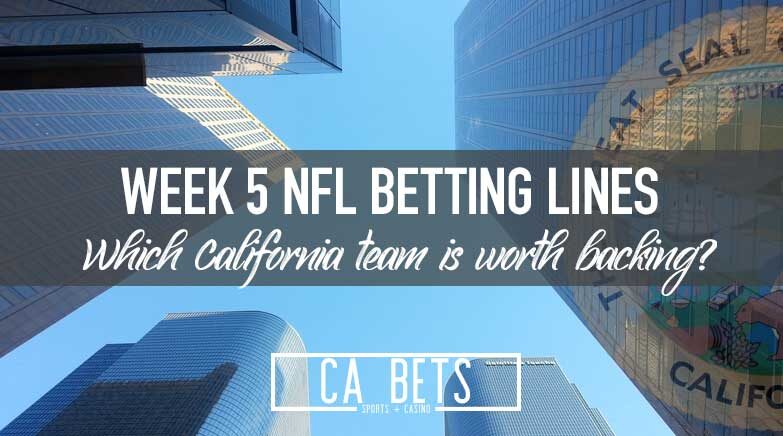 The NFL has seen high flying offense take over as scoring is up in 2020. That’s no different for the Rams, 49ers, and Chargers as they all head into Week 5, averaging over 21 points per game. The Rams have the best record among teams in California, sitting at 3-1. The 49ers are 2-2, and the Chargers are 1-3.

The Rams and Niners are favored this week as the Chargers are dogs on Monday night. With the Rams and 49ers in the same division as the Seahawks, they will need every win possible to keep up with a red hot Seattle team.

Fortunately, both teams have favorable matchups against lesser opponents, although the Rams cross-country trip is not ideal. The Chargers will need to find ways to win with rookie quarterback Justin Herbert under center. This team is still a year or two away from trying to compete with Patrick Mahomes and the Chiefs.

The Rams head to Washington to take on the Football Team this week. This is their third road game on the east coast in the first five weeks. The travel could affect the Rams, but this Washington team has not played great, and Dwayne Haskins was benched this week. LA struggled with the Giants a bit, but they should bounce back in D.C.

San Francisco takes on the Dolphins this Sunday after losing to the Eagles on Sunday night. The Niners should be able to handle the Dolphins, but they are still pretty banged up. Miami hung around with Seattle on Sunday before the Seahawks pulled away late, so it would be no surprise if the Dolphins did that again to an injured 49ers team.

The Chargers have the Monday night game in the Superdome against the Saints. LA is coming off a tough loss in Tampa Bay and now has to travel back east. New Orleans has struggled this season and could have problems moving the football on the Chargers defense. Justin Herbert almost took down Brady in Tampa Bay, so let’s see how he does against Brees in New Orleans.

Despite the Dolphins’ early struggles, they should be able to hang around this banged-up San Francisco team. The 49ers were knocked off at home to the Eagles, and Miami is well-coached and should be able to keep San Fran guessing. The Dolphins offense is decent enough to move the football on Sunday. They will need their defense to come up and make a few stops. As long as Garoppolo is out for the 49ers, anything is possible.

I really like the Chargers in Week 5 to stay within seven points against New Orleans. The Saints have struggled early this season, and Brees looks like old age is catching up to him. The Chargers will be able to move the football on Monday night, so it will come down to how well the defense limits the Brees and Kamara duo.